Carnival music drifts through the air, while children run around, shrieking with glee. Flashes of juggled torchlight illuminate the dirt path in front of the tents, while barkers call to passerby, enticing them to play their games. Above it all, the glowing, orange eye watches on…Always.

“Come one, come all!

The Darkmoon Faire is finally here, and you won’t want to miss this, my dears. We have, among our wondrous delights, pets for you that have some bite. There are some that screech, while others fly, and one whose Howl means doom is nigh. So, battle well and play the games, then all these pets are yours to claim!”

There are 24 pets to be found at the Darkmoon Faire, from a few different sources, so let’s jump right in and get started!

When you’re coming down the path from the portal to Darkmoon Island, Lhara can be found on the right, before you get to the Deathmatch Pavilion. She’s a female Orc. 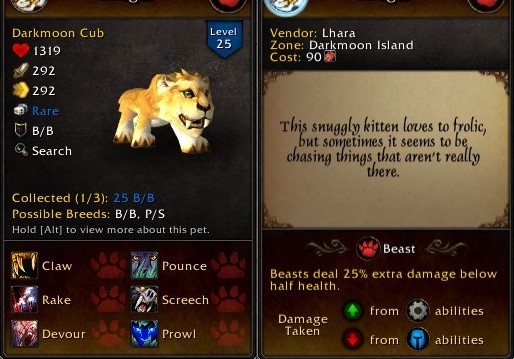 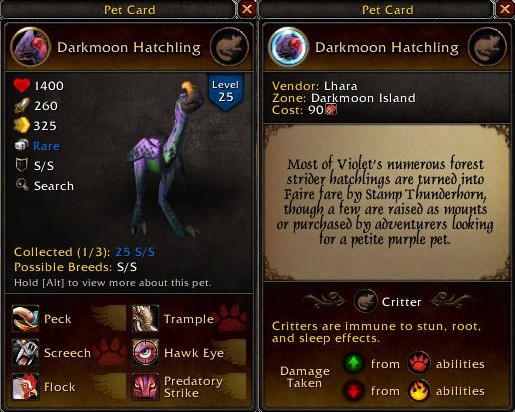 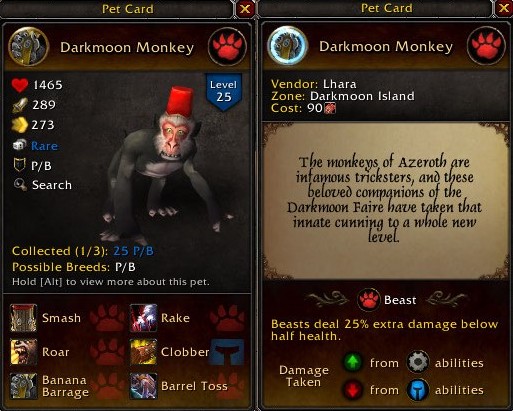 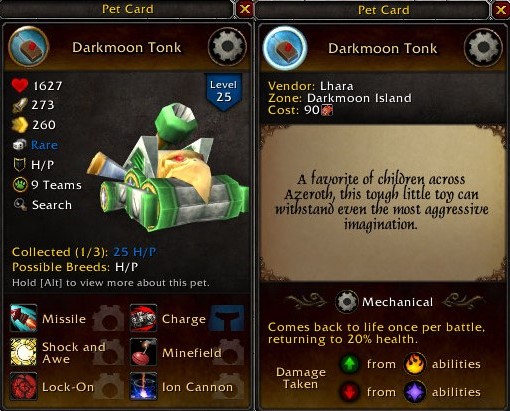 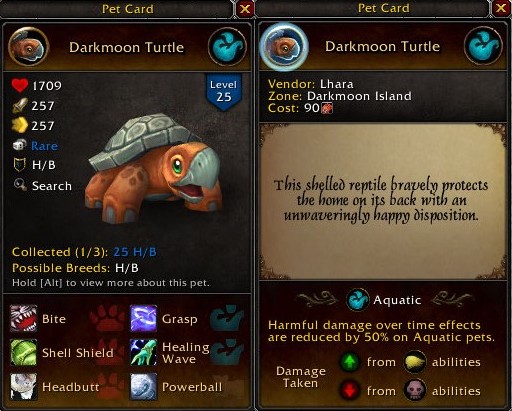 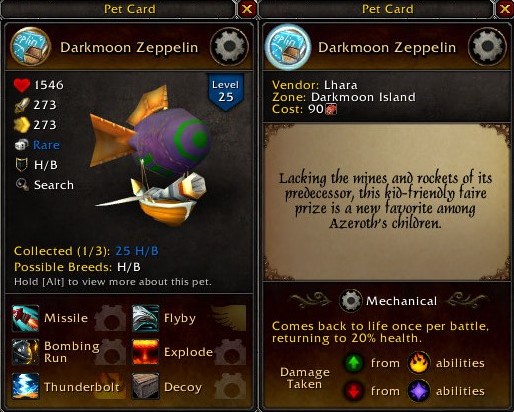 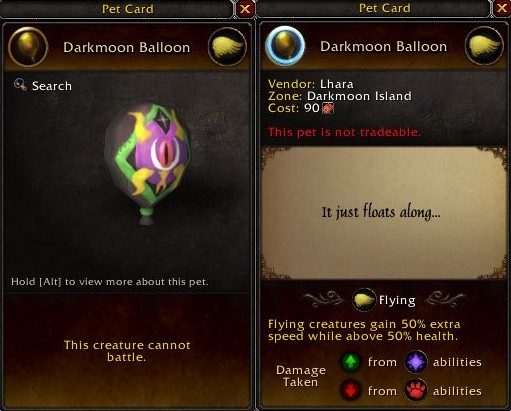 This young male Orc is a moving vendor. He’s small, and can be easy to miss. If you’re coming down from the Darkmoon Island portal, he can be found on the left side, south of the first purple tent, and all the way around the back of the second purple tent. You may want to make a macro to target Flik, to make it a little easier on yourself. 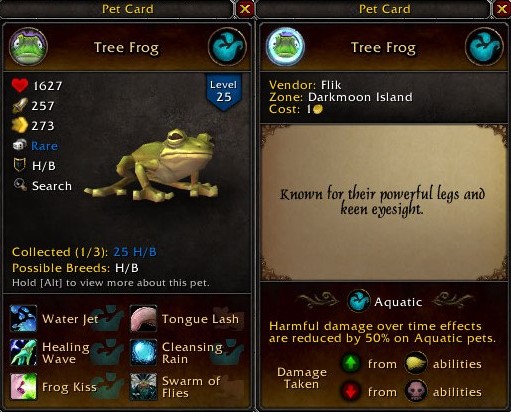 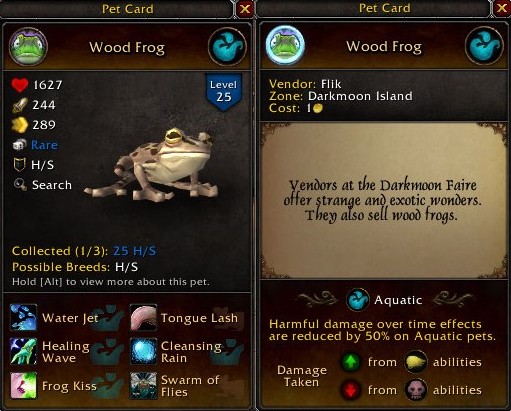 This vendor is a male Gnome, and is also a moving vendor, though he’s easier to find than Flik. You’ll see him pushing his balloon cart up and down the main thoroughfare, from the Deathmatch Pavilion down to the beach. 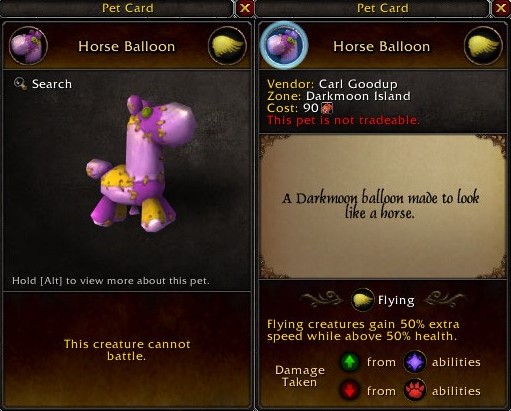 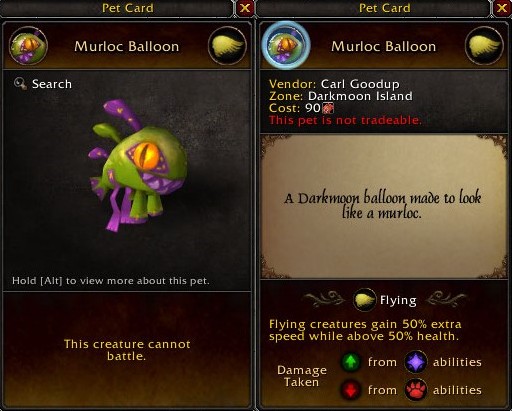 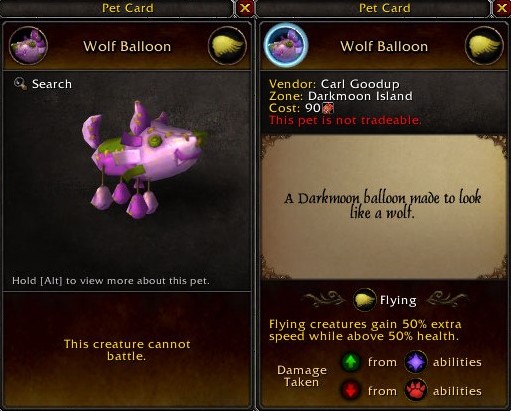 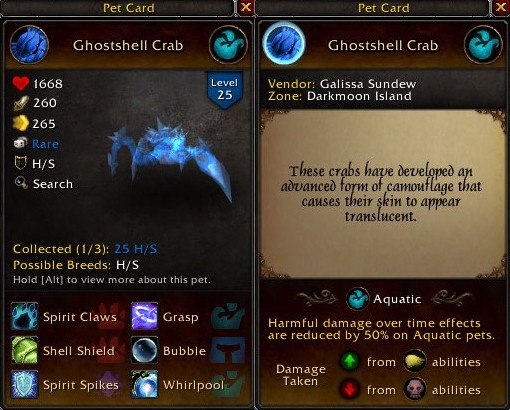 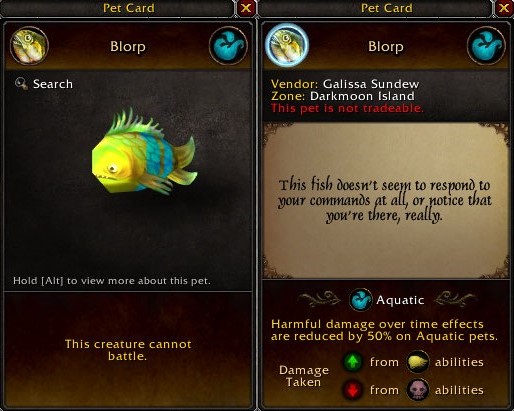 There are two daily pet battle tamers on Darkmoon Island: Jeremy Feasel and Christoph VonFeasel. They can be found on the right side not far from the entrance of the Faire, and will cost Darkmoon Game Tokens to fight.
You can find our strategy page for these tamers here.

These two tamers are also required for the achievement An Awfully Big Adventure, which awards the pet Trunks. You can find our strategies for this achievement here.


This tamer awards an item called Darkmoon Pet Supplies, which has a chance to contain: 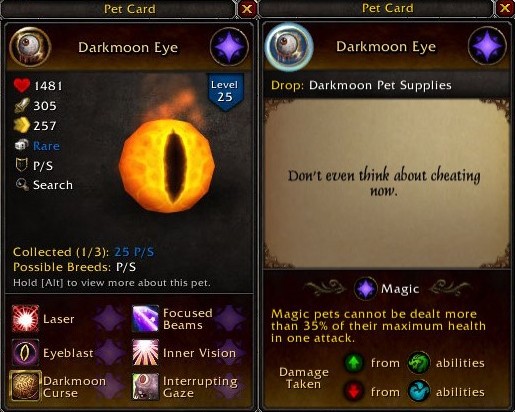 This tamer awards an item called Greater Darkmoon Pet Supplies, which has a chance to contain: 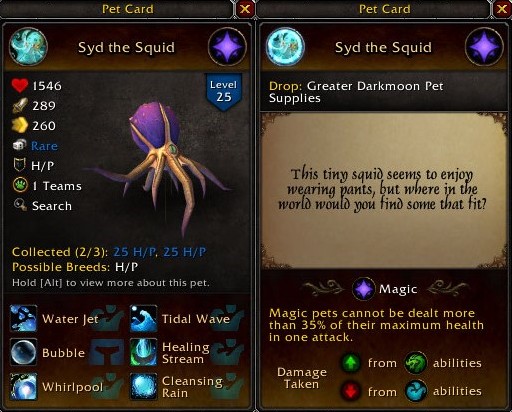 This pet can be found in various locations in the green areas behind the tents, as well as along the gray, mountain area that goes from the north along the right side of the island to the south if you’re looking at the map. 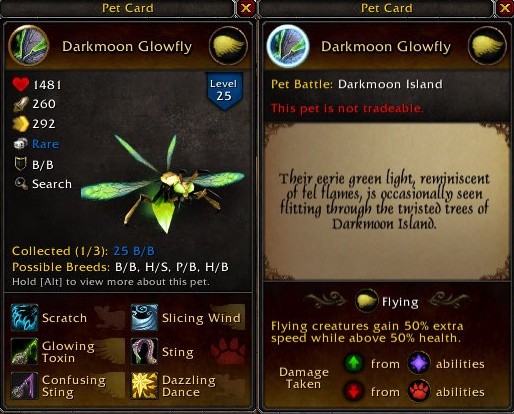 This pet will sometimes appear as a secondary pet in the wild pet battles on the island. 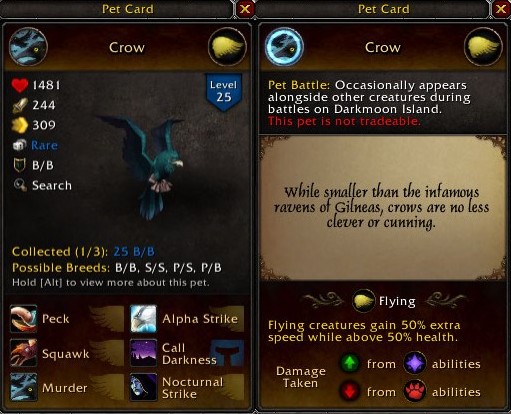 This pet drops from the Darkmoon Rabbit, which is an elite mob that can be found on the south-eastern beach of the island. It’ll be anywhere from around the cave entrance on south along the beach.

Don’t look for a giant rabbit—it’ll be about normal size. You need to be max level to loot it, and as far as we can tell it can be looted multiple times a day. The respawn is anywhere from 6 and 34 hours, according to comments on wowhead, and the more players you have to take the rabbit on, the better. 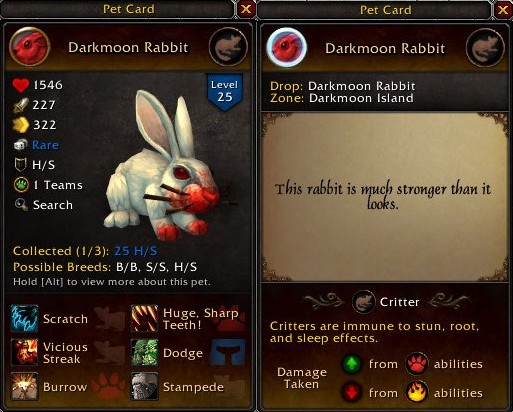 This pet is a drop off Moonfang, an elite mob. She has the model of a giant white wolf with a patch of moonbeam illuminating her. She can be found in the green area to the northwest of the Faire entrance, just south of the gray mountain ‘curve’.

She can be summoned by killing Moonfang Snarlers (Normal Mobs), which will lead to the spawning of Moonfang Dreadhowls (Elite Mobs), and after enough elites have been killed, Moonfang will spawn.

Moonfang is on about an hour spawn timer, and as far as we can tell is able to be looted multiple times a day. You’ll need to be on a max level character to receive loot, and it’s recommended to be in a group of around 10 players. 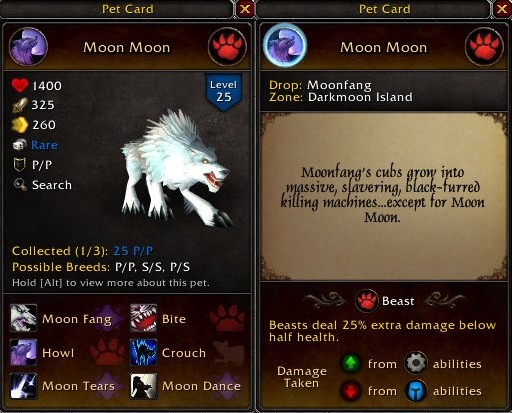 Hogs is a reward from the achievement That’s Whack! To get this achievement you must score 45 points in one session of Whack-a-Gnoll. You’ll probably need a couple of practice sessions if you’ve never done it before, and/or feel free to hop over to YouTube and check out a video beforehand. You'll be running around whacking plush gnolls in barrels. The gnoll that looks like Hogs gives 9 points, and the plainer gnolls give 1. Avoid hitting the babies.

The game area for this will be on the right side, not far from the entrance to the Faire. 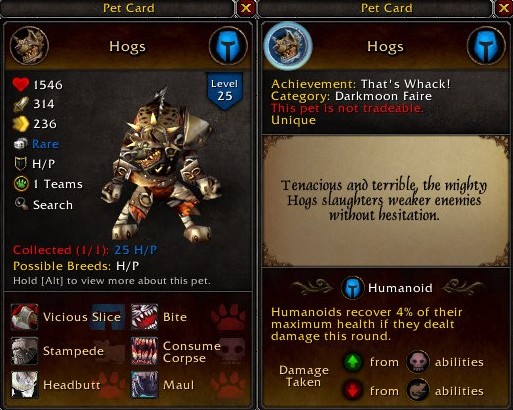 This pet is a reward from the achievement Big Rocketeer: Gold, which is part of a progression of achievements, starting with Rocket Man. It’s a racing game, with specific goals for each achievement / quest. Your best bet here is to watch a couple of videos on the achievements, and try out the track yourself. The quest / starting area is down by the docks. I'd explain further, but it's really one of those things you need to see & do to get a good idea of what to expect. 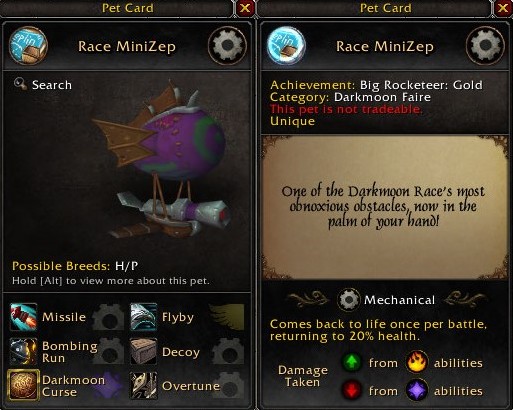 This pet has 0.5 % chance to be fished up from the Shipwrecked Debris fishing pools, with the average cast number being somewhere between 200-300 casts. 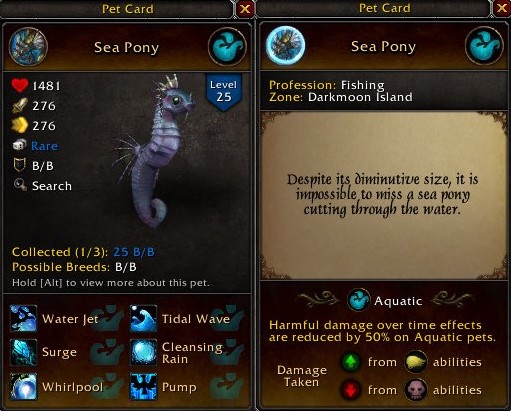 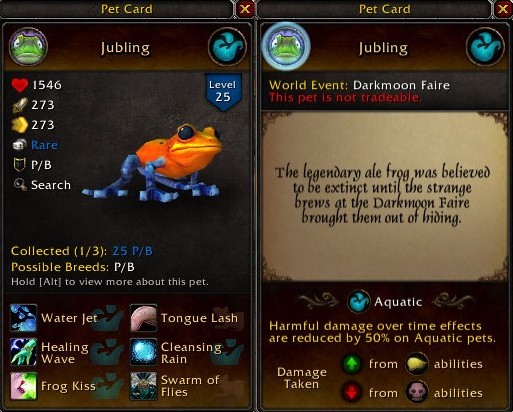 This little frog will take a bit of traveling to get.

1 – You’ll need to grab some Dark Iron Ale Mugs. This can be purchased from Pluggar Spazzring in the Grim Guzzler in Blackrock Depths, or from your Auction House. The number you’ll need might vary depending on how far away Jubjub is from the NPC Morja, so it’s best to buy between 5-10. Don’t forget, you’ll need at least one more after luring Jubjub to give to Morja!

2 – Find the NPC Morja, who’s at 55.8, 70.6, or if you’re looking at the map, she’ll be behind the second, big purple tent on the right from the entrance of the Faire. You don’t need to interact with her yet.

3 – Look for Jubjub somewhere in the grassy area/forest behind Morja. You’ll need to lure Jubjub over to Morja by placing the Dark Iron Ale Mugs on the ground until you place the last one at Morja’s feet. His ‘range’ for the mugs seems to be roughly ten yards, which is why having more Dark Iron Ale is better than not having enough.

4 – Once Jubjub is lured, Morja will have a quest available called ‘Spawn of Jubjub’. You accept the quest, give her one more Dark Iron Ale Mug, and you’ll get an Unhatched Jubling Egg.

5 – Now it’s just a matter of waiting seven days for the egg to hatch, at which point you’ll receive A Jubling’s Tiny Home. Click on the item, and congrats! You’re now the proud owner of Jubling!

Well, after collecting all those pets it must feel like you deserve a Feat of Strength! The Darkmoon Faire can be quite an undertaking, and we congratulate you on all your pet collecting success during this month’s Faire.

So, until next month: Happy Battling!


* Breeds will only be listed if there’s more than one.
** If pets are listed as cageable, it means you can skip the farming hassle and head over to the Auction House, if you prefer!