Those who tried to log in to the PTR today found the servers down, which could only mean one thing: more content! Along with a scad of datamined class changes, auction house tweaks, boss model updates, and much more, we were greeted by some new pets. I’m happy to report that we will be awash in void, tentacles, and eyeballs, with some lovely new models and abilities!

This content update fleshed out some drops we’ll see in three different areas: Corrupted Zones, Horrific Visions, and the Ny’alotha Raid. The vast majority are coming from the Horrific Visions, so it’s likely we’ll be doing a fair few of them to get all the different spawns. No word yet on what these Corrupted Zones are, but they’re likely some form of assault. Perhaps they’ll be part of a temporary event that will run until the next xpac pre-launch/launch?

Please keep in mind this is off the PTR, so some of the pets don’t have all their abilities yet, and everything is subject to change. 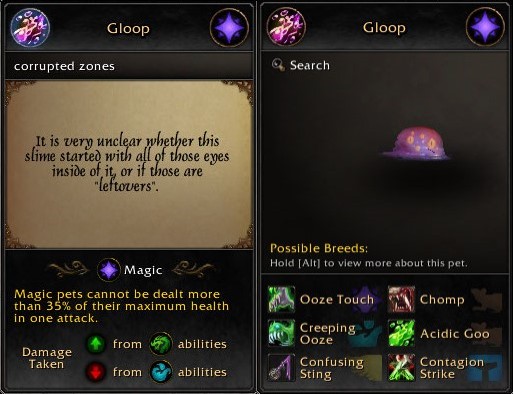 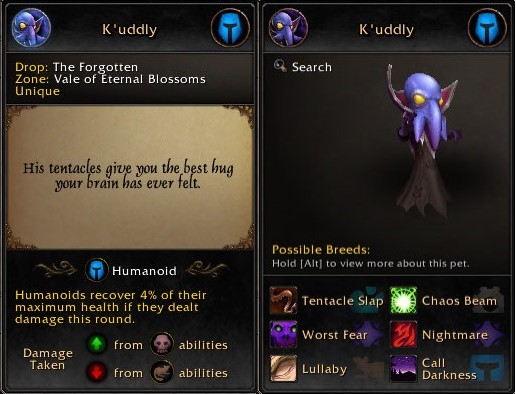 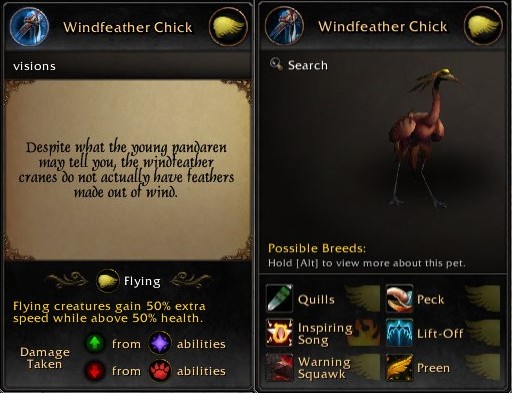 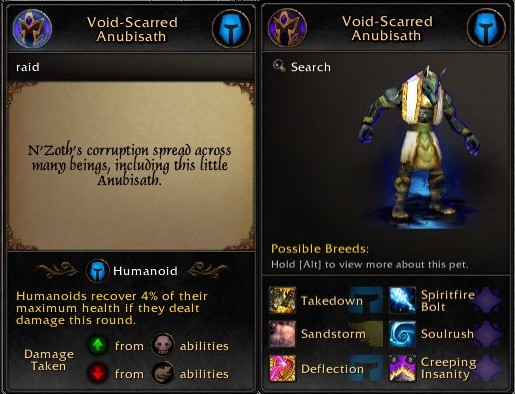 Two of the pets we posted about previously—Void-Scarred Pup & Void-Scarred Toad—have seen a change to their model. Whether Blizzard will stick with this new model, or revert to the old one, is yet to be seen. What do you think, pet community? Do you prefer just a little hint of void on the pets, or do you like the full void models?

We’re also getting some new abilities, as well as one only previously used by a Blizzcon pet! The one I’m most excited about is a new weather effect called Toxic Fumes: 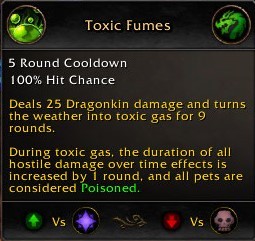 We’ll see this on the pets Anomalus & Rotbreath. This may not be as big a deal in PvE, but it makes me wonder if we’ll see some new PvP metas more heavily focused on using all poison abilities. What do you think?

Contagion Strike will be on Gloop & Rotbreath, Jade Barrier on the Jade Defender, Void Crash & Void Nova on the Void-Scarred Beetle, and Locust Swarm is on the Aqir Hivespawn.

However, new might be a reach for most of them:

We’re also getting the unique ability Eye Beam from the 2015 Blizzcon Pet, Murkidan, released to the raid pet Corrupted Tentacle.

Unfortunately, the new pet dungeon hasn’t been released on PTR for testing yet, but as a collector I have to admit I’m excited for some of these new pet models. My personal favorite is the Corrupted Tentacle, though Ra’kim runs a close second. How about you? Do any of these new models make you want to run the new Horrific Visions ad nauseum until you’re ready to rip N’Zoth to shreds? Or do the tentacles just creep you out a bit too much, and you’re looking for something more traditionally cute?

Well, that’s all for now, and hopefully the next build will bring more information on these pets, as well as the new pet dungeon. So until next time: Happy Battling!